The Nintendo Switch is a great versatile gaming console which can be used anywhere, from the living room to on the go. However, it does lack in environmental friendliness when compared to its competitors such as Sony’s PlayStation 4 and Microsoft’s Xbox One.

The “how the nintendo switch was made” is a question that has been asked for years. The Switch was designed with an eco-friendly philosophy. 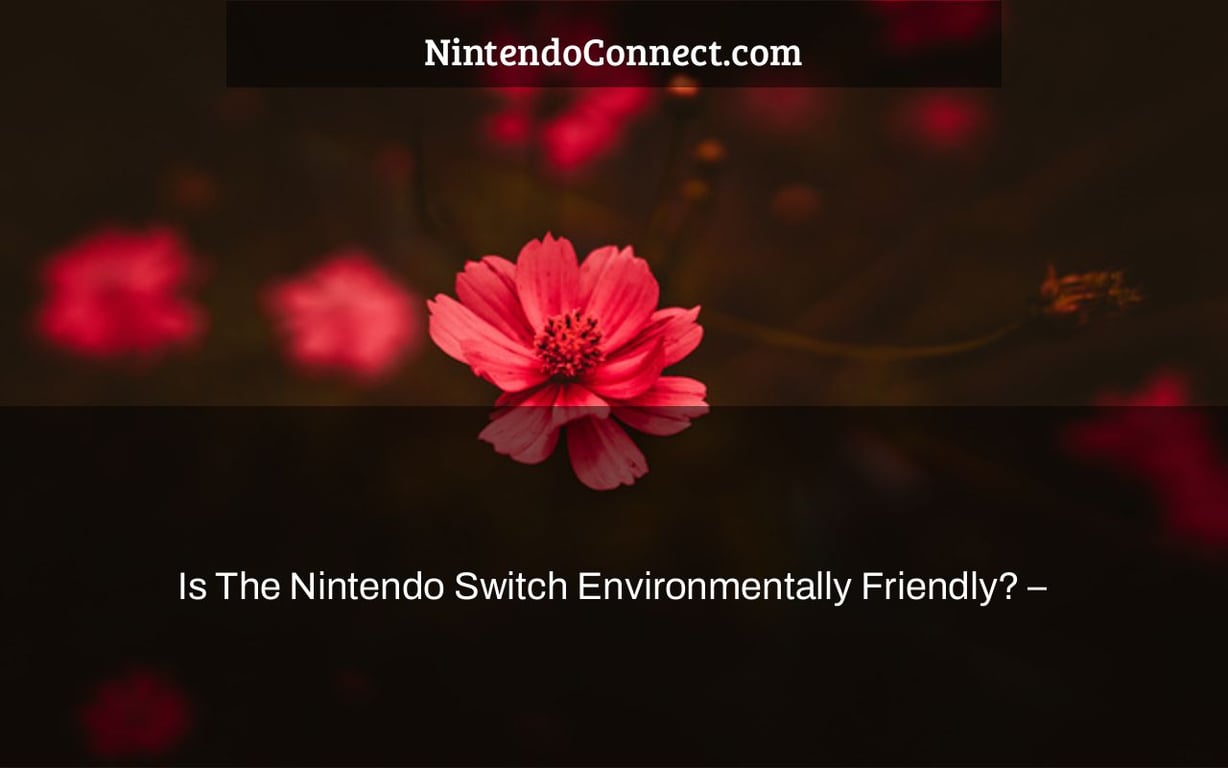 The Nintendo Switch is a fantastic device, but is it eco-friendly? Game cartridges and game businesses generate a significant amount of garbage; how much waste does Nintendo generate? I made the decision to find out.

In Greenpeace’s annual guide to cleaner electronics in 2010, Nintendo received a 1.4/10 for its chemical, e-waste, and energy policies, making it the lowest of 18 businesses examined. Nintendo of America, on the other hand, recycled 99 percent of returned items in 2019 and significantly improved its environmental policy.

However, since the subject is more sophisticated and does not have a simple solution, I will describe what raw materials are used to create the Switch and how Nintendo gathers these elements.

Is the Nintendo Switch Safe for the Environment?

In a world where firms are growing more ecologically conscious, Nintendo’s environmental strategy and how it obtains raw materials for the Switch remain ambiguous.

Nintendo’s environmental policies are more focused on recycling, and Nintendo of America provides a free Take Back Program for consumers to mail in unwanted items for recycling. Nintendo Canada and the United States processed 313.8 tons of returned merchandise in 2019, with 99 percent of it being recycled.

Nintendo also reused almost two-thirds of returned products in their original form, which is significantly better than the 1.4 out of ten it received for its chemical, e-waste, and energy policies in 2010, when it was ranked equal worst out of 18 firms in Greenpeace’s annual study.

What Is the Material Composition of the Nintendo Switch?

Metal and plastic are used in the construction of the Nintendo Switch. Multiple interior components, such as the battery and circuit board, need minerals, while the outside shell of protection and general design of the console is made of plastic.

Apart from metal, the Switch is composed of plastic, which is formed of coal, natural gas, and oil, and Acrylonitrile butadiene styrene or ABS covers the majority of the Nintendo Switch, including the Joycons, buttons, and tablet.

The Switch’s screen is made of transparent plastic rather than glass, making it susceptible to scratches. While Nintendo requires a paint dye to color the plastic, nothing is known about the process.

The issue with Switches materials is that the process of obtaining them is very damaging to the environment.

Despite the fact that Nintendo states on their website how they get materials, Nintendo does not provide information on when and how they obtain raw materials, thus we must estimate by knowing how these elements are obtained from the Earth.

Nintendo has made a commitment to lessen environmental impact by adhering to each country’s environmental legislation in the creation of our specialized video game systems and accessories.

Metals and coal, two essential components of the Switch, can only be obtained from the Earth’s crust; there are two methods of mining (strip mining and underground mining), neither of which is ecologically beneficial!

Mining devastates both landscapes and natural environments, particularly streams, where the dust from mining kills both fish and plant life. Coal pollution has been related to a variety of ailments, including asthma and cancer, in populations near coal mines, as well as animals and plant life.

The Switch requires plastic oil and natural gas, which must be dug onshore or offshore, exposing stored water to the Earth’s surface and delivering deadly radioactive chemicals that are damaging to both people and the environment.

Offshore drilling is especially harmful since it requires a lot of land, which might endanger animals. All drilled oil and gas will be utilized as fossil fuel throughout the Switch’s life cycle, and a lot of damage has already been done to mother Earth in the Switch’s early phases.

The metal components of the Switch must be “separated from waste material to make a concentrate… by adding chemicals to the ore materials and processing them through a number of procedures,” according to ICMM.

Oral combustion is very harmful to the environment; for more information, see the ICMM page mentioned above.

The PCB or Circuit board (PCB) is made of metals mostly copper and gold for conductivity, to connect these parts a solder is used which is kinda like glue, this materials is very toxic and releases noxious fumes to the environment.

Nintendo pays extra attention to ensuring that chemical chemicals that are harmful to persons or the environment are not used in the manufacture of components for our specialized video game systems and accessories. Nintendo has created its own chemical ingredient control guidelines to enhance green procurement methods, based on the RoHS Directive and REACH Regulation in Europe, as well as toy legislation in other countries.

Other materials, such as ABS plastic, the Nvidia Tegra X1 processor, and ribbon cables, do not contain additional materials since no one knows how they are made, but they, like the majority of materials, are highly harmful to the environment.

Finally, all of the components are delivered from facilities in Southeast Asia, where the Switch is manufactured, and the consoles are then distributed all over the globe.

You can obviously see how harmful the Nintendo Switch’s construction is to the earth, but how ecologically good is Nintendo as a company? How does Nintendo compare to other electronic firms that go through comparable production processes and need fossil fuels?

Nintendo has made initiatives to be more environmentally friendly in order to limit the use of fossil fuels, as seen by its CSR report. “Energy-efficient forms of transportation (modal shift)” is one option.

Nintendo’s modal shift shows that it is prioritizing the delivery of its raw materials by automobiles and trains over the more polluting aircraft and ships. Ships are the most cost-effective mode of transportation for electronic manufacture.

How Environmentally Friendly Is The Nintendo Switch Throughout Its Lifecycle?

Because the battery is rechargeable, the Nintendo Switch utilizes little or no raw harmful materials, and if a portion of the system is broken, Nintendo will restore the particular damaged parts utilizing the Nintendo Product Recycling effort.

Nintendo claims to “recycle close to 100% of the materials from any returned items or repair parts that cannot be reused, and cooperate with a certified recycler to guarantee responsible recycling practice,” yet it does not specify HOW components are recycled.

Nintendo is impressive in that it not only accepts their own consoles, but also consoles from their biggest rivals, Sony and Microsoft! These recycled materials are reconditioned and used to create new Nintendo goods, decreasing the consumption of fossil fuels in the process.

The transportation of recycled items will need fossil fuels until electric automobiles become commonplace, but Nintendo recommends recycling locally with a “recycler with a dedication to environmental stewardship who will treat the donated material in a responsible manner.” reducing waste

What happens to the remaining items after Nintendo recycles practically all of them? Electronic garbage is either dumped in a large hole or burnt, consuming fossil fuel in transportation and coal in the fire.

People like Greta Thunberg have brought eco-friendly policies to the masses in this modern, more eco-friendly world, and despite Nintendo’s use of toxic materials and environmentally unfriendly methods to manufacture the Switch, I believe most companies are subjected to these practices due to cost in production.

The Nintendo Switch is not an environmentally friendly product. The company has said that they get their materials from recyclable sources, but it is not clear if the source of these materials is sustainable. Reference: where does nintendo get their materials.

How does the Nintendo Switch affect the environment?

A: The Switch is a portable console with the ability to play games on it, as well as other tasks like watching movies. It does not have an internal battery and therefore needs to be plugged into something for power. On average, you can use roughly 10 hours of power over 15 hours of gameplay time before needing to recharge your Nintendo Switch in order that you may do so without interruption while playing or when trying out new features!

How are Nintendo switches disposed of?

A: The Nintendo Switch can be recycled through the Nintendo website. To do this, youll need a prepaid shipping label and your original packaging (usually an envelope) as well as two copies of your receipt or proof of purchase to complete the process.

Do video games harm the environment?

A: Video games are actually a big positive for the environment, as they tend to use less resources than other forms of media such as movies and TV shows. This is because video games require fewer materials to produce them, which allows for their production with recycled materials like old CDs or even discarded plastic.

Is The Nintendo Switch Worth It For Adults? –

Does The Nintendo Switch Need Wifi To Play Games? –