The Nintendo Switch console uses cartridges and a cartridge port to distribute games. Despite this, the company still makes software that is available through download codes or cards. Why? It turns out there are some interesting technical reasons for making this decision…

Nintendo has always used cartridges for their consoles. The company has gone back to the older technology because it is cheaper, more durable, and easier to manufacture. 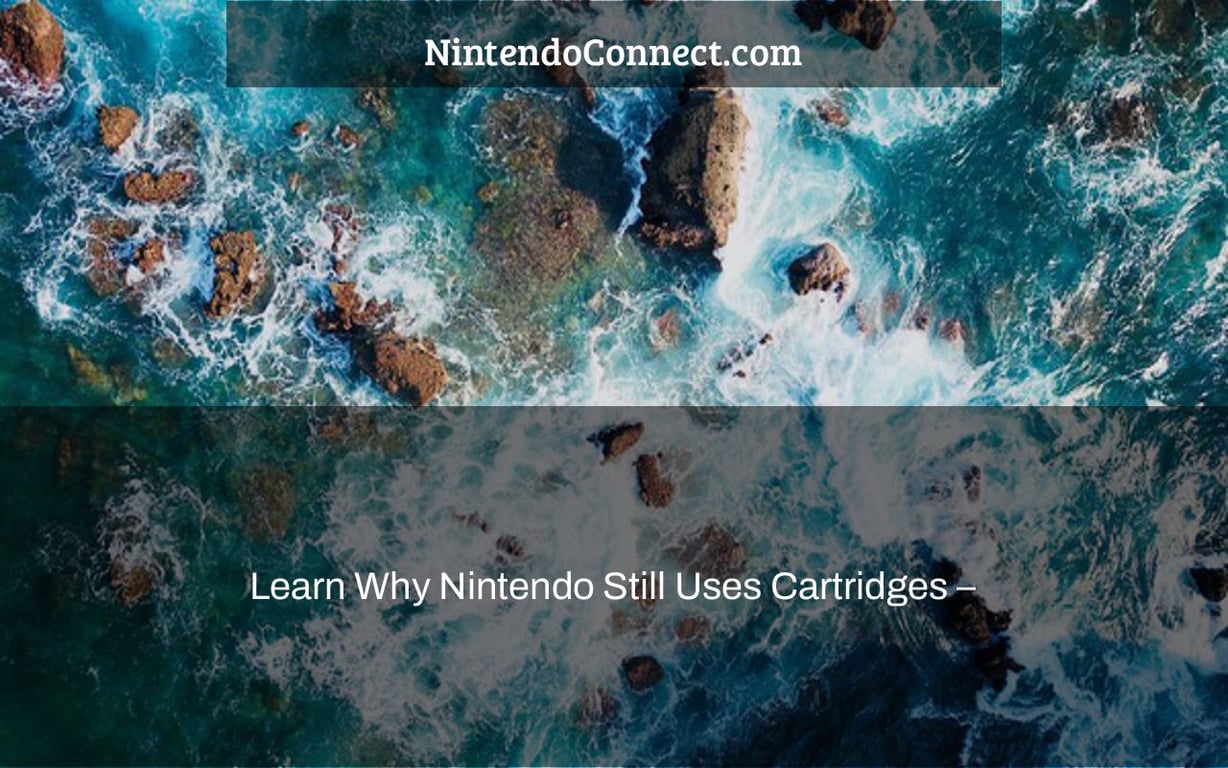 Have you ever wondered why Nintendo’s games are still played on cartridges? I was curious as well, so I did some research on the internet to find an explanation.

Nintendo employs cartridges because the technology has advanced to the point where read rates are quicker than disc read speeds, allowing games to be played without the need to install them like Xbox One/PS4 titles. Pirates Have a Harder Time With Cartridges., more resistant to damage, and considerably more portable than Discs.

I’ll go through why Nintendo employs cartridges rather than blue-ray discs and the benefits of doing so, as well as why cartridges are costly and how this impacts the price of Nintendo Switch games.

Explained: Why Does Nintendo Use Cartridges?

The biggest reason Nintendo switched from using discs with the Wii & Wii U to cartridges with the Nintendo Switch is Portability. Cartridges are far smaller than Discs and so are the cartridge readers compared to disc readers.

A CD reader would significantly increase the Switch’s size and impair its mobility. Consider that the Switch is shorter than a CD/Blue-ray player, and that since the device will be in motion when being used in handheld mode, the disc reader will have continual difficulty reading the disc; discs must be scanned frequently to operate.

While there are methods for Nintendo to fix this issue, such as utilizing discs in a protective case like Sony’s PSP, the fact is that it would merely complicate the system and make it unsuitable for the Switch.

Because discs must be constantly read by spinning motors with a laser reader, the Switch requires a lot more power from the system; also, because the Switch is primarily a handheld system, using less battery powder via a cartridge is the far more battery-efficient solution; also, because there are fewer moving parts, Switch components are less likely to be damaged.

Now, bear with me because this is about to get a little academic. Areal density refers to how much digital data you can fit onto a storage media, and the unit is bit/in2.

Historically, hard drives have been inferior than optical drives or computer drives; but, in 2016, optical drives (cartridges) eclipsed discs for the first time, with a super 2.8 terabits/in2! Nintendo Switch cartridges can contain up to 32 GB of data, which is rather impressive.

Cartridges are simply quicker than discs and have a far higher run speed, which is why, unlike the Xbox One and PS4, your Switch does not need you to load games from blue-ray discs since the cartridge technology is fast enough.

Unlike blue-ray discs, which may be scratched or destroyed if the system is handled while the game is playing, rendering them useless. Cartridges, on the other hand, are significantly more resistant, making them suitable for a portable console.

In addition, unlike a blue-ray disc, they are not readily twisted or damaged, take up significantly less space, and are quite portable.

Pirates Have a Harder Time With Cartridges.

Because so many people are familiar with blue-ray discs, they are relatively simple to pirate. If you have the right drive, a disc has all of its data exposed and is totally accessible, making it much simpler to modify and duplicate.

Despite the fact that Switch cartridges are essentially SD cards, Nintendo sets the price of the cartridges, which means that pirating Nintendo cartridges is now relatively costly.

Furthermore, Nintendo Switch cartridges have a complicated encryption scheme that makes obtaining decrypted game data (which is required to edit the game) very impossible without knowing particular, tightly restricted description keys. Nintendo despises piracy, and cartridges are a powerful tool in the fight against it.

The Drawbacks of Nintendo Cartridges

Nintendo, unlike its rivals Playstation and Microsoft, who employ blue-ray discs, uses cartridges with capacities ranging from 1 to 32 gigabytes. The processing expenses are virtually the same whether you burn 6GB or 50GB to a blue-ray disc. With Nintendo, however, this is not the case.

The more capacity you need for storage, the more costly cartridges become, and according to Polygon, Nintendo Switch cartridges may be “about 60% more expensive than Blue-ray discs used by other systems.” As a result, the more storage you have, the greater your manufacturing expenses will be, and hence the less money you’ll make.

Third-party games for the Switch simply have to be more costly since otherwise, the creators would lose money, making Switch development extremely complex and not for everyone.

Nintendo Switch cartridges can only store 32 gigabytes of data, which isn’t much since most blue-ray games are double-sided and carry at least 50 gigabytes of data while being significantly less expensive to make.

Developers, on the other hand, thrive on a challenge, and the fact that Witcher 3, a massive open-world RPG and one of the best games of this generation, was successfully ported to the Switch on a mini mini 32 gig cartridge proves the Switch’s third-party potential and what you can do with that 32 gig cartridge.

Check read my post to discover whether The Witcher 3 is worth it on the Switch.

Is it possible to play Nintendo Switch games without using a cartridge?

If you have a physical game with a cartridge, you must play the game using the cartridge. The Nintendo Switch, on the other hand, has a plethora of digital games accessible on the Nintendo E-shop that you can change out and play without having to replace out the physical cartridge.

I’m confident you’ll find what you’re searching for at the official Nintendo E-shop, where games are continuously on sale! Please go here to read my piece on the debate between physical and digital games.

Do switch cartridges have a tendency to break?

Switch cartridges are now significantly more durable than blue-ray discs, and they cannot be easily damaged or broken. However, you must exercise extreme caution while inserting a Switch cartridge into your console since if it is broken, it may destroy your Switch card reader, rendering your Switch unable to play physical games!

The problem is that if any of the ridges on the bottom half of an SD Card/Switch cartridge are broken or fractured enough to move when inserted, your cartridge reader may be damaged.

This problem was discovered in a Japanese YouTube video of a repair shop worker informing the public about the problem. So, if you’re using a cartridge that you got secondhand or borrowed from a friend, be cautious.

Check out my article for a durability test of the switch.

Why do switch cartridges have such a horrible flavor?

A bittering ingredient has been introduced to Nintendo Switch cartridges as a safety precaution to prevent youngsters from mistakenly ingesting them.

A Nintendo spokesman stated the following in an interview with Polygon.

“A bittering ingredient (Denatonium Benzoate) has also been added to the game card,” the spokesman stated, adding that Nintendo advises parents to keep Switch cartridges out of the reach of youngsters to prevent “accidental ingestion.”

Please give it a try at home! So you don’t have to, here’s a comical video of Youtubers putting the bittering agent to the test.

Nintendo has been using cartridges for their consoles since the Nintendo Entertainment System. The Switch is no different, and there are still many questions about why they use them. Reference: does nintendo switch use discs.

Why did Nintendo go back to cartridges for the Switch?

A: Nintendo went back to cartridges for the Switch due to their belief that in-house development would be more efficient and timely.

Why did Nintendo likely stay with a cartridge format for the N64?

A: The cartridge just had a lot of benefits that the CD-ROM format did not. These benefits included less cost, and it was much easier to find storage space for games on cartridges compared to CDs.

A: It is difficult to say whether cartridges will last. This depends on the size of your game cartridge, how many times a day you play it and what type of machine you are using. If a game were played for 4 hours per day with an average sized Game Cube cartridge, this would mean that it could still be used 40 years from now without any problems!